As a born again baptized believer, I believe in the following Articles of Faith:​​​

1.   THE SCRIPTURES- I believe that the Holy Bible was written by men divinely inspired, and is a perfect treasure of heavenly instruction; that it has God for its author, salvation for its end, and truth without any mixture of error for its matter; that it reveals the principles by which God will judge us, and therefore is, and shall remain to the end of the world, the true center of Christian union, and the supreme standard by which all human conduct, creeds, and opinions shall be tried.

2.    THE TRUE GOD - I believe that there is one, and only one, living and true God, and intelligent, spiritual, and personal Being, the Creator, the Preserver and ruler of the universe, infinite in holiness, and all other perfections to whom we owe the highest love, reverence and obedience. He is revealed to us as Father, Son, and Holy Spirit, each with distinct personal attributes, but without division of nature, essence or being.

3.     THE FALL OF MAN - I believe that Man was created by the special act of God, as recorded in Genesis. “So, God created man in his own image, in the image of God created he them; male and female he created in them” (Genesis 1:27).  And the Lord God formed man of the dust of the ground, and breathed into his nostrils the breath of life: and man became a living soul” (Genesis 2:7).He was created in a state of holiness under the law of his Maker, but through the temptation of Satan, he transgressed the command of God and fell from his original holiness and righteousness; whereby his posterity inherit a nature corrupt and in bondage to sin, are under condemnation, and as soon as they are capable of moral action, become actual transgressors.

4.     THE WAY OF SALVATION - I believe that the salvation of sinners is wholly of grace; through the mediatorial offices of the Son of God; who by the Holy Spirit was born of the Virgin Mary and took upon him our nature, yet without sin; honored the divine law by his personal obedience, and made atonement for our sins by his death. Being risen from the dead, he is now enthroned in heaven; and united in his person the tenderest sympathies with divine perfections, He is in every way qualified to be a compassionate, and all-sufficient Saviour.

5.    JUSTIFICATION - I believe justification is God’s gracious and full acquittal upon principles of righteousness of all sinners who believe in Christ. This blessing  is bestowed, not in consideration of any works of righteousness which we have done, but through the Redemption that is in and through Jesus Christ. It brings us into a state of most blessed peace and favor with God, and secures every other needed blessing.

6.    A GOSPEL CHURCH - I believe that a visible church of Christ is a congregation of baptized believers, associated by covenant in the faith and fellowship of the Gospel; observing the ordinances of Christ; governed by his laws; and exercising the gifts, rights, and privileges invested in them by His Word; that its only Scriptural officers are Bishops or Pastors, and Deacons whose Qualifications, claims and duties are defined in the Epistles to Timothy and Titus.

7.    BAPTISM AND THE LORD'S SUPPER - I believe that Christian baptism is the immersion in water of a believer, in the name of the Father, and Son, and Holy Ghost; to show forth in a solemn and beautiful emblem, our faith in the crucified, buried, and risen Savior, with its effect, in our death to sin and resurrection to a new life; that it is prerequisite to the privileges of a church relation; and to the Lord's Supper, in which the members of the church, by the sacred use of bread and wine, are to commemorate together the undying love of Christ; preceded always by solemn self-examination.

8.    CHRISTIAN SABBATH - I believe that the first day of the week is the Lord's Day, or Christian Sabbath, and is to be kept sacred to religious purposes, by abstaining from all secular labor and sinful recreations, by the devout observance of all the means of grace, both private and public, and by preparation for that rest that remaineth for the people of God.

9.    CIVIL GOVERNMENT- I believe that civil government is of divine appointment, for the interest and good order of human society; and that magistrates are to be prayed for, conscientiously honored and obeyed; except only in things opposed to the will of our Lord Jesus Christ, who is the only Lord of the conscience, and the Prince of the Kings of the earth.

10.  RESURRECTION - I believe that the Scripture clearly teach that Jesus rose from the dead. His grave was emptied of its contents. He appeared to the disciples after his resurrection in many convincing manifestations. He now exists in his glorified body at God’s right hand. There will be a resurrection of the righteous and the wicked. The bodies of the righteous will conform to the glorious special body of Jesus.

11.  THE RETURN OF THE LORD - I believe that the New Testament teaches in many places the visible and personal return of Jesus to this earth. “This same Jesus which is taken up from you into heaven, shall so come in like manner as ye have seen him go into heaven,” The time of his coming is not revealed. “Of that day and hour knoweth no man, no, not the angels of heaven, but my Father only” (Matthew 24:36). It is the duty of all believers to live in readiness for his coming and by diligence in good works to make manifest to all men the reality and power of their hope in Christ.

12.  THE FREENESS OF SALVATION - I believe that the blessings of salvation are made free to all who believe in the Gospel. It is the duty of all to accept them by penitent and obedient faith. Nothing prevents the salvation of the greatest sinner except his own voluntary refusal to accept Jesus Christ as Teacher, Savior and the Lord.

13.  GRACE & REGENERATION - I believe that regeneration or the new birth is a change of heart wrought by the Holy Spirit, whereby we become partakers of the divine nature and holy disposition is given, leading to the love and practice of righteousness. It is a work of God’s free grace conditioned upon faith in Christ and made manifest by the fruit which we bring forth to the glory of God.

14.  REPENTANCE AND FAITH - I believe that repentance and faith are sacred duties, and also inseparable graces, wrought in our souls by the regenerating Spirit of God; whereby being deeply convinced of our guilt, danger and helplessness and of the way of salvation through Christ, we turn to God with unfeigned contrition, confession, and supplication of mercy; at the same time heartily receiving the Lord Jesus Christ as our prophet, priest and king, and relying on him alone as the only and all-sufficient Savior.

15.  GOD'S PURPOSE OF GRACE - I believe that election is the gracious purpose of God, according to which he regenerates, sanctifies and saves sinners. It is perfectly consistent with the free agency of man and in no way interferes with the salvation of any individual.

16.  SANCTIFICATION - I believe that sanctification is the process by which, according to the will of God, we are made partakers of his holiness; that it is a progressive work; that it is begun in regeneration; and that it is carried on in the hearts of believers by the presence and power of the Holy Spirit, the Sealer and Comforter, in the continual use of the appointed means especially the word of God, self-examination, self-denial, watchfulness, and prayer.

17.  PERSEVERANCE OF SAINTS - I believe that such only are real believers as endure to the end; that their persevering attachment to Christ is the grand mark which distinguishes them from superficial professors; that a special Providence watches over their welfare; and they are kept by the power of God through faith unto salvation.

18.  HARMONY OF THE LAW AND GOSPEL - I believe that the Law of God is the eternal and unchangeable rule of his moral government; that it is holy, just and good; and that the inability which the Scriptures ascribe to fallen men to fulfill its precepts, arise entirely from their love of sin; to deliver them from which, and to restore them through a Mediator to unfeigned obedience to the holy Law, is one great end of the Gospel, and of the means of Grace connected with the establishment of the visible church.​

19.  BAPTISM AND THE LORD'S SUPPER - I believe that Christian baptism is the immersion in water of a believer, into the name of the Father, and Son, and Holy Ghost; to show forth in a solemn and beautiful emblem, our faith in the crucified, buried, and risen Saviour, with its effect, in our death to sin and resurrection to a new life; that it is prerequisite to the privileges of a church relation; and to the Lord's Supper, in which the members of the church, by the sacred use of bread and wine, are to commemorate together the dying love of Christ; preceded always by solemn self-examination. 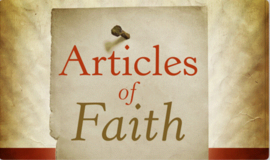